During her inaugural speech Eve said “I realise that my year of office coincides with financial restrictions previously unknown in local government and the outlook for the future is bleak – to put it mildly.  The control imposed by central government over the past 12 months have made the aims of any local authority practically impossible to achieve and planning for the future has become a hope rather than a reality.  But of course we must succeed.  We must, despite all restrictions, continue to prove that we are capable of good government at local level.  We have done so in the past and I know we can continue to do so in the future”. It was during her Mayoral year that several ‘Vietnamese Boat Families’ were welcomed and housed in Blyth following the humanitarian crisis unravelling in South East Asia. Eve was elected Deputy Mayor in 1989-90 and was created a Freeman of the Borough in 2001 recognising her 25 years service to the community.  She lived with her mother at Rowanlea Bungalow, station Crossing, New Hartley.  Eve died suddenly on Monday 24th April 2006 aged 75.  Council colleagues paid tribute to ‘A lovely lady’ and held a minutes silence at committee meetings throughout the week.  In August 2007 a walkway through the dunes linking Seaton Sluice and Blyth was named the Eve Black Coastal Walkway.  During its construction in 2000 Eve had been a great campaigner for the scheme realising its great potential for local residents and visitors.  The sign was unveiled by the Mayor Councillor Cilla Isles and Eve’s sister Pat Banks.  Eve's brother Ronald died in Oxfordshire in 1994 and her sister Pat in March 2009.
The Story   The Past Mayors jewel belonging to Evelyn Ann Black was acquired from E-Bay on 14th June 2014.   As with all Mayoral regalia it was of interest due to the high possibility of being able to research the recipient from local newspapers during their term of office, Eve Black was no exception.  As the Borough of Blyth Valley was only created in 1974 and then disbanded 35 years later in 2009, enquiries to locate the official Mayoral portrait proved negative, and eventually it was discovered that upon reorganisation these had been given back to families, thus Eve’s was not available.  Enquiries with Blyth Library and Maureen Thompson a Library Assistant, who had known Eve personally, proved more successful.  Maureen kindly provided some very useful newspaper articles and a copy of the much sought after portrait photograph of Eve from the Council Yearbook.  The information from the newspaper articles allowed Eve’s maiden name to be established and thus a more detailed search of ancestry.uk, which together with a general trawl of the internet enabled a brief biography to be pieced together for posterity.  This story is another example of someone who did so much for their community, and yet could so easily be forgotten if not for a very small ‘badge’ engraved with a name coupled with a desire to uncover detail about their life. 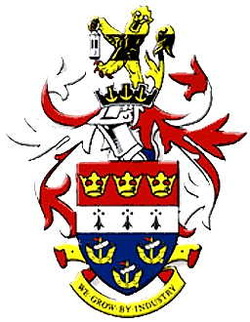 The Borough of Blyth Valley
ARMS: Per fess Gules and Azure on a Fess Argent between in chief Ancient Crowns fessewise Or and in base three Lymphads two and one proper flags flying to the dexter Gules three Ermine Spots Sable.
CREST: Issuant from a Mural Crown Sable charged with three Miners' Picks shafts upward Or a demi Lion guardant barry of three thoughout Or and Sable holding in the dexter paw a Miner's Lamp proper; Mantled Gules doubled Argent.
MOTTO:  'WE GROW BY INDUSTRY'.
GRANTED: 28th November1975.
The arms are based on those of the former Borough of Blyth. The three crowns taken from the arms of Tynemouth Priory and are incorporated owing to the great importance of the Delaval family, who formerly owned the Priory, in the area. Similarly the three spots of ermine are taken directly from the Delaval arms. It is interesting to note that the Delavals were largely responsible for the development of coal-mining in the area which ultimately developed the port and led to increased prosperity. The three ships represent the importance of the Port of Blyth, they like each emblem on the shield is displayed in triplicate to commemorate the three former authorities which merged into Blyth Valley - the Borough of Blyth, the Seaton Valley UDC and part of Whitley Bay Borough Council.  The lion, as well as being a national emblem, symbolises strength and the lamp together with the black seam running through the lion symbolises the coal-mining industry which at one time was thriving in the area.  The motto is taken from that of the original Borough of Blyth.
Blyth Valley was a Local government district and borough in south-east Northumberland, England, bordering the North Sea and Tyne and Wear. The two principal towns were Blyth and Cramlington. Other population centres include Seaton Delaval, and Seaton Sluice.  The borough was formed on 1 April 1974 by the merger of the borough of Blyth, Seaton Valley urban district, and part of the borough of Whitley Bay.  The district council was abolished on 31st March 2009 as part of the structural changes to local government in England effective from 1 April 2009 with responsibilities being transferred to Northumberland County Council, a unitary authority.
Thanks are extended to Blyth Library, Northumberland County Council and Maureen Thomson for their help in piecing together this story.
Jewel Details:
Return to: The Collection
Go to Previous Page:   Ronald Ivan BIRT
Go next Page:  Albert William BLACKBURN
This page last updated   11 Aug 14
Return to Top of Page