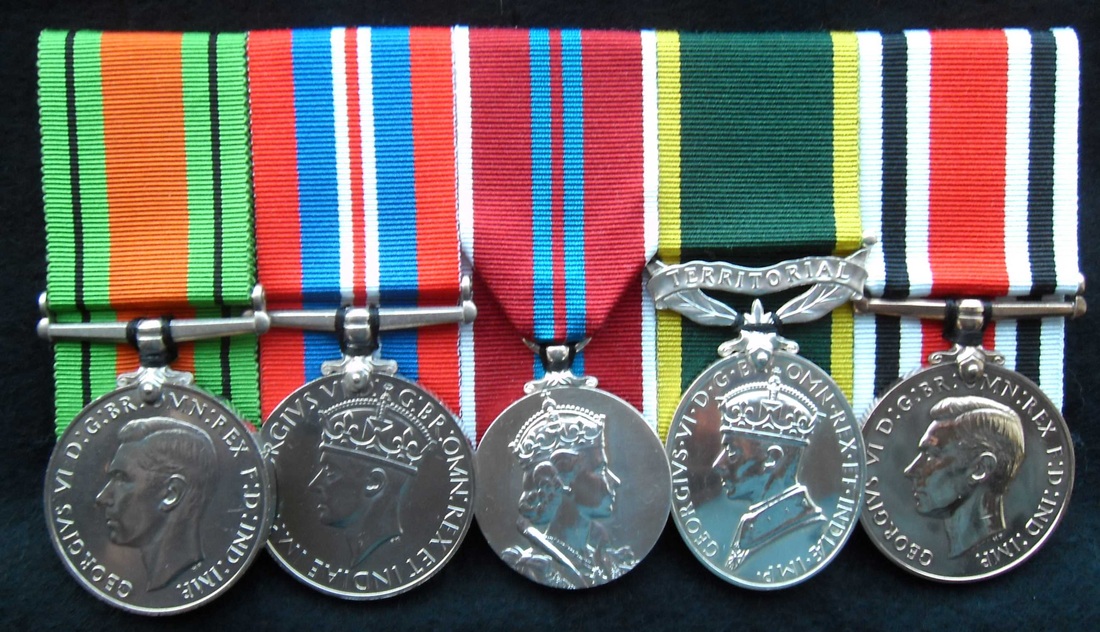 Defence Medal. War Medal 1939-45. Coronation Medal 1953. Efficiency Medal 'Territorial'. Special Constabulary Faithful Service Medal.
The Man   Reginald Henry Cain was born on 5th July 1903 in Islington, London, son of Henry, a Solicitors Manager Law Clerk and Mary Louie, nee Reynolds.  He was Baptised in the Parish of Holy Trinity on 2nd September by Reverend Richard Hargreaves.  By the time of the 1911 census, Reginald, aged seven and family were living at 10 Richmond Crescent, Barnsbury (in later years Tony Blair, British Prime Minister lived at No 1until winning the 1997 General Election) together with Mary's mother Anne Reynolds.  By 1925 he was living with just his mother Mary at 7 Cecile Park, his Father and Grandmother having presumably passed away. In the last quarter of 1932, Reginald married Gwendoline Martha Willmott at Edmonton and they lived at 1 Chase Hill and later 10 Little Park Gardens in Enfield.  During the 1930s Reginald enlisted into the Territorial Army, although little detail is known of his regiment or service, and also served as a Special Constable being awarded the Faithful Service Medal.   Following the outbreak of World War II, Reginald transferred from the Territorial Army into the Royal Air Force Volunteer Reserve.  He was granted a commission on 21st November 1939 as Acting Pilot Officer on probation in the Equipment Branch, with service number 75930 and for the duration of hostilities.  He was made temporary Pilot Officer two months later on 8th January 1940, although still on probation.  Reginald was granted the war substantive rank of Flying Officer on 17th September 1941, his appointment as Pilot officer being confirmed on 21st November.  On 1st March 1942 he was promoted to temporary Flight Lieutenant, the war substantive rank being confirmed 19 months later on 14th October 1943.  Following the end of the war Reginald was awarded the Defence Medal and War Medal 1939-45. and remained in the RAFVR.  In the London Gazette of 4th July 1947 he was awarded the Efficiency Medal 'Territorial', by virtue of the fact he had been a former member of the TA and had served the qualifying period in the Air Force - a scare award to the RAF, only 259 being awarded.  Reginald was promoted to Squadron Leader, and on 1st September 1948 following the reconstitution of the RAFVR, relinquished his commission, but immediately re-appointed in the reconstituted section at his substantive rank of Flying Officer and still within the Equipment Section for a five year period.  He was promoted to Flight Lieutenant on1st March 1951, his seniority backdated to 24th September 1948.  He was extended again for a further five years on 1st September 1953, and during the same year awarded the Coronation Medal on the accession of Her Majesty Queen Elizabeth as an Officer at the Combined Recruiting Centre, No 61 Group.  He retired from the RAFVR on 1st September 1958 aged 55.  No further detail is known about Reginald except that he died on 25th August 1984 aged 81, and was living at 120 Burnt Hill Road, Lower Bourne, Farnham, Surrey.  Probate was granted at Winchester and he left £23,801.

The Story   The set of medals awarded to Reginald Henry Cain were seen in the London Medal Company catalogue on the Internet, and were of immediate interest due to the fact the group contained a double long service award including an Efficiency Medal, which was named to the recipient in the RAF.  Whilst this is not rare, it can be considered scarce as only about 259 members of the RAF who had previously served in the Territorial Army were awarded one, the medal being specific to the TA.There was minor detail with the group, which was confirmed by a trawl of the London Gazette.  Additional information was acquired from ancestry.com, and unusually there was only one direct 'hit' on the name Reginald Henry Cain, the dates of which tied in with his retirement from the RAFVR in the London Gazette.  There may be further limited detail available from the RAF lists and in due course and the abstraction of his will in September 2014 provided little further information. 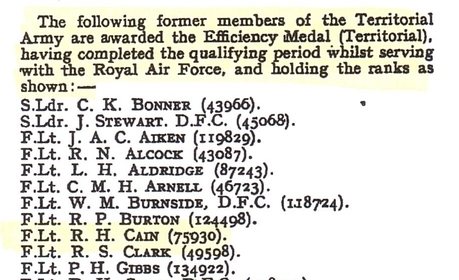